How to use aromatic essentials oils in 5 different ways

I discovered the magic of essential oils or aroma oils a few years back. Ever since then I am hooked. At no point of time will you not find a few bottles in my home. These oils have multipurpose benefits besides of course soothing your senses.And I use them in multiple different ways mostly to create a spa like setup at home. Being a spa junkie these oils instantly help in creating an ambience that puts me in a relaxed mode. 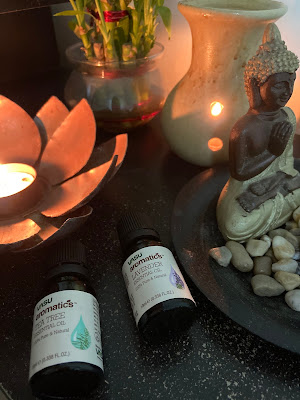 Vasu Healthcare an Indian company that is 40 years old and is present across 40+ countries recently sent me samples of its essential oils to try and I must say I am really impressed. They sent me their lavender and tea tree oils which are 100% pure and natural and smell divine. Here is how I suggest you can use them too:

1) Use them in a diffuser

I think this is one of the primary reasons to buy them. Put a couple of drops diluted in water in a candle burner. lavender fragrance has been known to soothe the mind and calm it. It acts as an instant distressed. 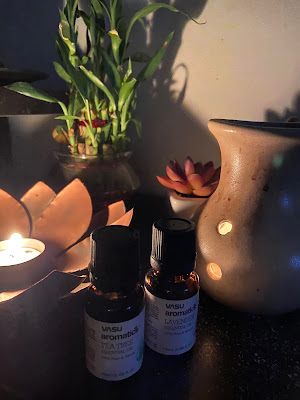 2) Use them mixed with hair oils

Put a couple of drops of these essential oils in your regular favourite hair oil. Each essential oil has a different benefit. Tea tree oil helps in controlling dandruff, while lavender oil because of its distressing properties helps in restful sleep, reduces headaches. In fact to relax the mind one can even put a couple of drops on the pillow cover just before sleeping.

I just recently made soaps at home and infused them with a few drops of these oils. They smell divine. Besides that one can even mix them with body lotions a couple of drops every night. Lavendar oil helps to lighten skin and is an effective stress reliever while tea tree oil improves skin appearance and has anti-acne and anti inflammatory properties. 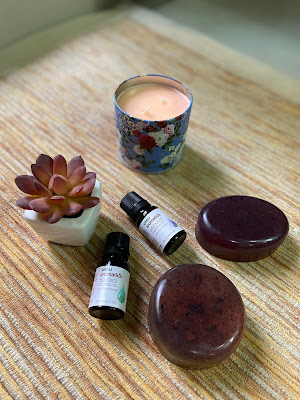 4) Use in making Candles

If you are someone who makes candles at home and loves the aroma of essential oils then use these oils to add some fragrance to your candles and make them aromatic. Sit back and relax to the light smell of lavendar float in your house.

5) Use them to take steam

This is something I have to try myself. While taking steam if one has cold or in general to clear out the nasal passage put a couple of drops of any of these oils will instantly smooth the senses and distress you.

Purchase these Vasu healthcare oils from the links below:

Email ThisBlogThis!Share to TwitterShare to FacebookShare to Pinterest
Labels: Beauty

Paris in just one day!

Paris the city of love, Paris the city of love and Paris - the city of many of my wishlists was finally going to be ticked off this summer. The plan was to start a euro trip from Paris with one of my friends and then meet another one in Prague. However, the universe had other plans and my Paris itinerary was shortened from 3 days to just 1 day. Essentially it acted like a stopover to Prague as there are no direct flights to Prague from Mumbai and I had to anyways flight via Paris.

But I was determined to not let this dampen my spirits and make the most of what i can see and do in Paris in that one day that I had. Also, like i mentioned earlier, this was a trip of many firsts for me so I was really excited to make it a memorable one. And I am glad I did not cut this part of my trip because it was so much fun doing things all by myself, chalking my own itinerary without anyone else's preferences interfering mine and finding my way through the Paris lanes and public transport. Made me feel more independent, confident and was liberating at the same time. Seriously, even if it for a short while just try a solo trip and you'll know what am I talking about. And Europe with it's accessible transport everywhere is a great place to start out!

So that's about travelling solo, now going back to the Paris itinerary. Since it was my first time in Paris and I had just a day I wanted to ensure I atleast cover the key sights and here are some tips:

A)List down the key sights you want to visit
B) Shortlist the ones that are close to each other so that you dont waste too much time in commute
C) Plan this before the trip so that you dont waste time on that day and chalk it out on a map.
D) The above will also help you choose your accomodation. Plan your stay closest to the first spot you marked in your route map.
E) Choose a hotel close to a metro station
F) Pre-research on how to reach the hotel from the airport so that again, you do not waste time on that day. Youve got just some hours right?

So that's how I went about chalking down sights and I knew Eiffel obviously had to be a part of the plan I also wanted to have the best view of the city because so many blogs spoke about it, and yes also not miss out on some Parisian shopping and eating. So here's sharing what all I did there -

First stop --> Hotel Elysees Bassano -
The airport has direct shuttle buses that take you to various parts of the city. I chose Elysees bassano as it is close to the famous champs de elysees and that is where i wanted to start my day. The bus dropped me at a stop that was 5 minute walk away from the hotel. The hotel was small like most in Paris but had all amenities one would require. And a lift and a great bed! 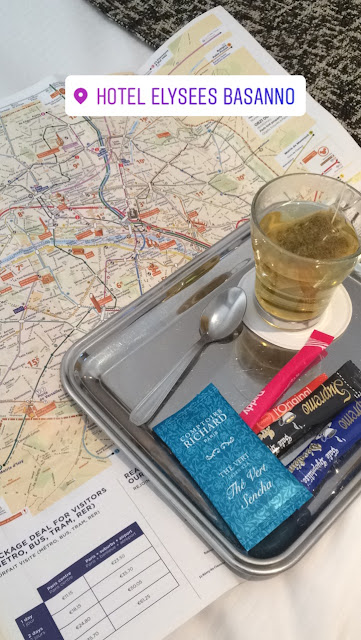 Next stop --> Arc de Triomphe and Champs Elysees
After a quick nap and a nice shower I stepped out to the nearest site. Arc de Triomph which faces the most famous street of paris champs elysees 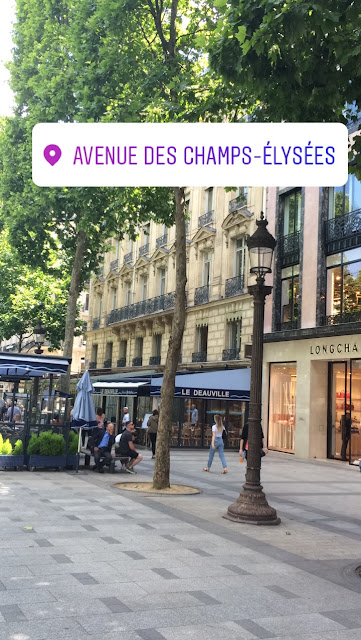 Next stop--> Laduree
How can a trip to Paris be complete without indulging in some french wine and macaroons. And which better place than the iconic Laduree to indulge in some. A walk at champs elysees has to include a visit to Laduree there. 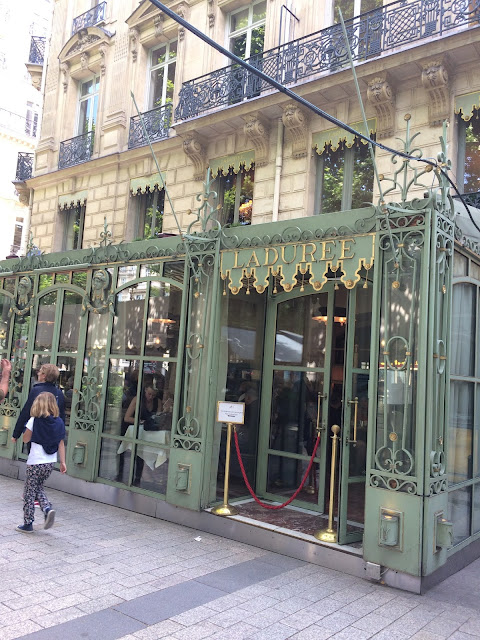 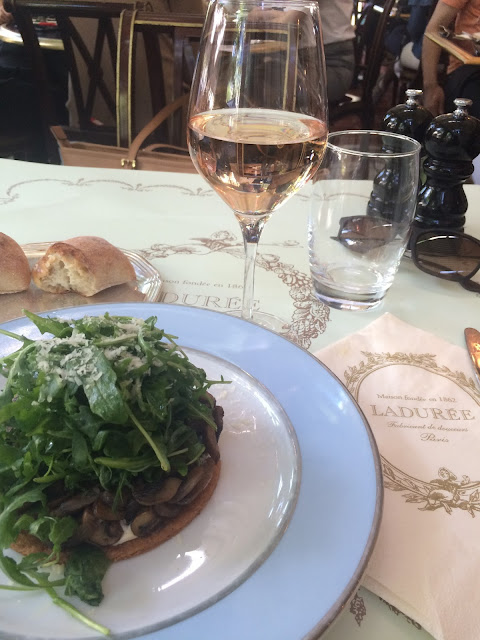 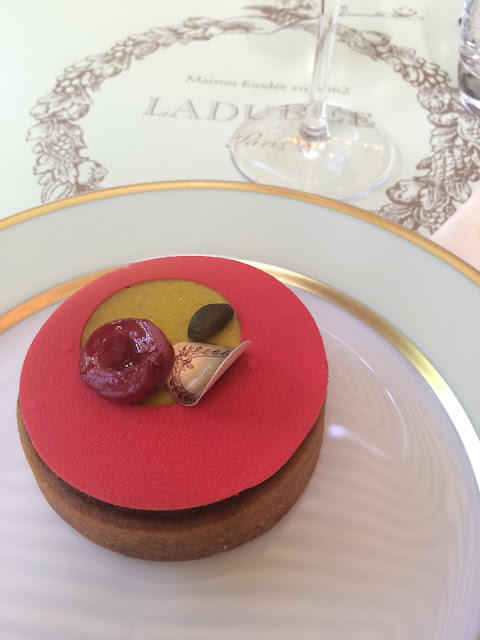 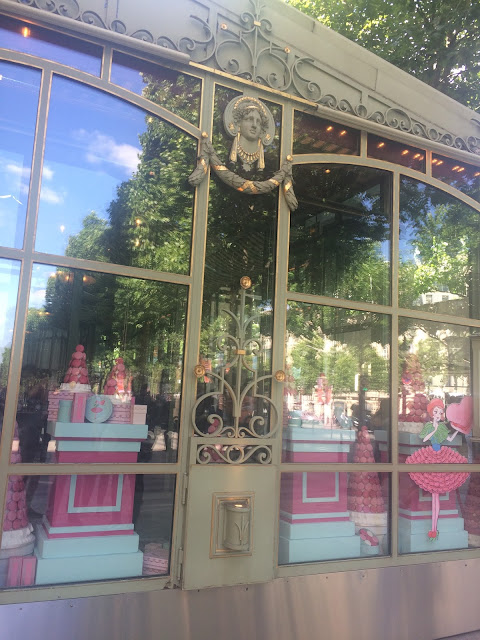 Next stop--> The Eiffel Tower, River Seine, Trocadero gardens
From Champs Elysees take a quick uber ride to be dropped at the Eiffel just facing the Trocadero. Now Eiffel has two sides - one facing Champs de Mar gardens and the other Trocadero gardens an station. I got off at the side facing Trocadero so that I could take the train then to my next stop.
Also, while at the Eiffel you can skip going on top to get the city view. there are lesser commonly known places to get the city view and a city view that has Eiffel in it too. Besides not going up the Eiffel will save you hours of waiting in queue when you are time pressed.

While I am making this sound so functional I completely forgot to tell you how the first sighting of this monument gave me the feels! Once i was done drooling i just went click click click.


Tip: Cross the road and then click your pics to get the whole of the Eiffel and avoid being photobombed by hordes of tourists. While you are here do not forget to take home some eiffel keychains and magnets as souveneirs from the trinket shops. The walk from the Eiffel to Trocadero also covers the river seine. Trocadero gardens is a great spot to take some pretty pictures of Eiffel and just sit and admire its beauty. The metro station too is just a walk down the stairs. One can choose to come back here in the night to get an evening view of the Eiffel sparkling with lights. 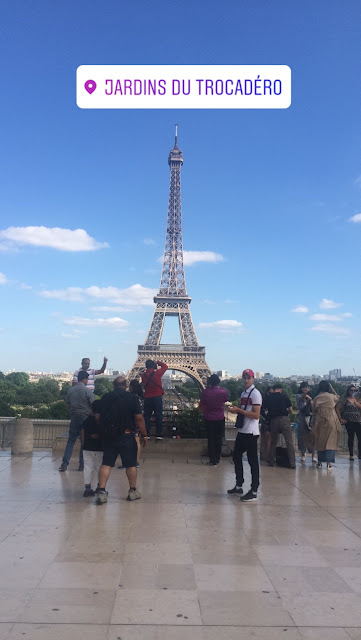 Next stop --> Palais Royal and Louvre
From trocadero walk a few steps down to enter the station. I didn't really know the route but there machines that help you plan the route map. The destination stop was Palais Royale Louvre Musuem and checked the fare and bought the ticket. think it was not more than 20 minutes to the destination station and the Museum Palace is just bang opposite the stop once you come out. Now since I was time pressed I didnt enter the musuem just marvelled at the beauty of the Louvre, the palace and the fountains from outside. It was a pretty place. 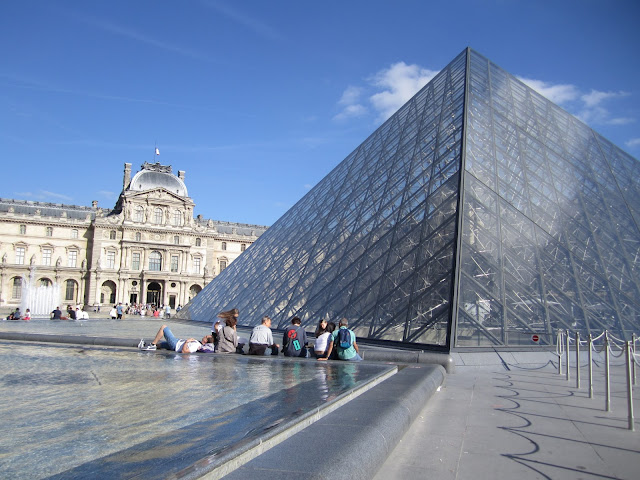 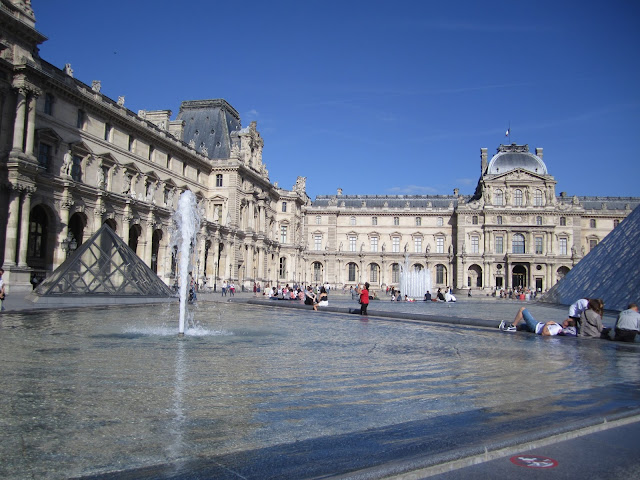 Next stop --> Perfume shopping at Fragonard
Like I mentioned earlier, Besides trinkets I also wanted to buy something parisian for my loved ones back home. So i had researched on original french perfumeries and came across Fragonard on one of the websites. They have a wide variety of perfumes that will not pinch your pocket. I bought lots of them to give as gifts. They came for around EUR 17 each. The shop was in a galleria mall right next to the louvre that houses a lot of other french stores and cafes.

Next stop --> City view from Montparnasse tower
Now I didnt want to lose sunlight before my next stop. So i grabbed a quick snack and started out for Montparnasse tower. I chose this place to get the entire city view just before the sun sets. There wasn't much queue hence unlike going on top of the Eiffel this really didnt take any time. Sat here for a good hour just admiring the beauty of the city and Eiffel against the sun setting. 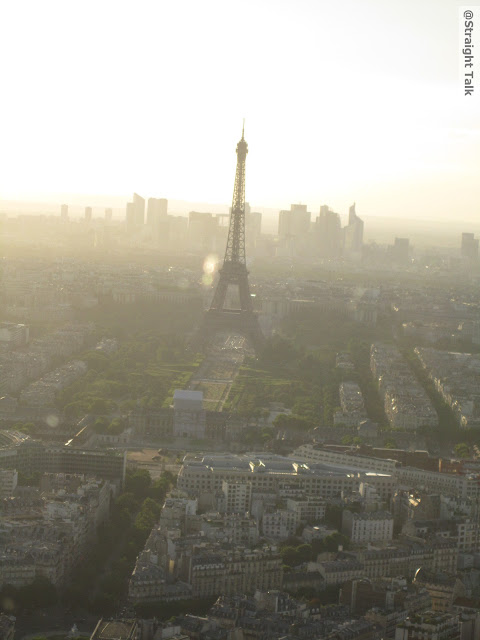 Next stop --> dinner and back to the hotel
After Montparnasse, i wouldve ideally liked to go back and see the eiffel by night with lights twinkling however, I was really dead with the jet lag and all the walking around and I knew I was going to come back to Paris someday with my husband and wanted to reserve that sight for that time. So I decided to call it a day with some good warm dinner and a glass of wine that I grabbed at a place called Sophia's just next to my hotel. Summer having longer hours of daylight really helped me cover whatever I wanted to. And I retired pleased as a punch looking forward to my flight next day for Prague.

Rajvi Bhow @ Straight talk
A marketing professional who thinks money is to be earned only to be invested in travel and fashion!

Show me some love!